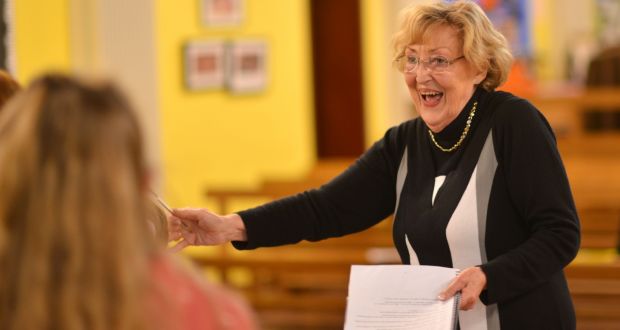 Betty Ann Norton nurtured talent in a committed band of children and teenagers, many of whom blossomed and matured under her careful attention. Photograph: Bryan O Brien

The founder and director of one of Ireland’s most prominent theatre schools, Betty Ann Norton, has died following a short illness.

“The secret of life is to know what you want,” she said in an Irish Times interview in 2003. “I’ve always known that I wanted to teach voice and acting.”

Betty Ann grew up on Ruben Avenue, off South Circular Road in Dublin, the older of two children to Frances and Eugene Norton. Her mother played the violin and had a great interest in the theatre and her father – who ran bacon shops on Grafton Street – had a lovely baritone voice. Her brother, Jim Norton, is the stage, film and television actor.

Following secondary school at St Louis’s convent in Rathmines, she took her speech and drama diplomas both for the Royal Irish Academy of Music and the Guildhall School of Music and Drama in London. Entrepreneurial from an early age, she travelled the country teaching speech and drama, in a yellow Ford Anglia bought for her by her father

In 1959, she opened the Betty Ann Norton Theatre School at 57 Harcourt Street in Dublin, which soon became a hub for children and young people keen to find expression for their dramatic talents. In the aforementioned interview, Norton said: “It was quite revolutionary, a woman running her own business. I taught adults as well as children and it never occurred to me that I couldn’t do it. I was still living at home and my brother was making his way in the Radio Éireann Players [a repertory company performing drama for radio in Ireland].”

In 1965, Betty Ann met her husband to be, Michael J Cunneen, on the Aran Islands – literally knocking him down as she was riding her bike. The couple married in 1967 and bought a house in Dún Laoghaire. With his background in amateur drama and set design, Cunneen was an asset to the theatre school too and became a lifelong co-director of the Betty Ann Norton Theatre School.

The school offered a range of classes from film and stage acting to mime as well as diplomas in speech and drama tuition. Norton continued to give many of the classes herself. A larger-than-life presence, she nurtured talent in a committed band of children and teenagers, many of whom blossomed and matured under her careful attention. She facilitated auditions for her students for roles in RTÉ dramas and Dublin theatres.

Vincent Lambe said she was an extraordinary teacher with so much passion and energy. “She changed the lives of so many people. We thought she would live forever.” Actors Michael Gambon, David Kelly and her brother Jim were patrons of the school down through the years.

In 1969, the school moved to 27 Harcourt Street, where it stayed for the next 36 years until works for the Luas line changed the streetscape so much that it became impossible for parents to drop off their children to classes. So, in 2006, Norton moved her theatre school back to her alma mater at St Louis.

There, she continued – ably assisted by a band of loyal tutors (most of whom were past pupils) – giving classes right up to the Covid-19 crisis. And, although she didn’t embrace online tutoring, she prepared Zoom drama classes for her tutors to give weeks before she became ill and died.

Betty Ann Norton is survived by her brother, Jim; his wife, Mary Larkin; nieces; and students past and present from her beloved theatre school. Her husband, Michael Cunneen, predeceased her in 2017.